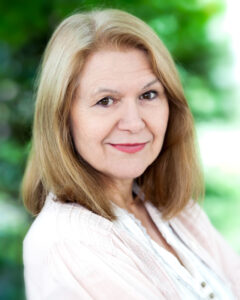 Lisa has been a regular story reader with us for a number of years. She is also an actor who has worked in both Australia and the UK.

Radio drama credits with ABC radio include the lead role in Minna Von Barnhelm and Footmarks in the Sand. Work on Australian TV and in film included the main cast of Neighbours and The Lancaster-Miller Affair, and female lead in the feature film Cool Change.

Since returning to the UK Lisa has recorded books with AudioGo Ltd., voiced animations with CBBC, and e-learning programmes with Kineo Ltd.