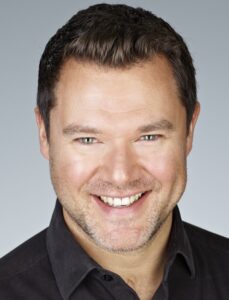 Glen McCready is the story announcer on The Story Player. Glen trained at The Webber Douglas Academy of Dramatic Art where he graduated with Honours.

Most recently, Glen made his Off-Broadway acting debut as Piers Morgan in the world premiere of “TRUTH, LIES, DIANA” by Jon Conway at the Snapple Theater Center, 1627 Broadway @ 50th Street.

He is also soon to be heard as the voice of J K Rowling’s brand new Harry Potter character: the misanthropic renegade potion master Zygmunt Budge in the forthcoming “WONDERBOOK: BOOK OF POTIONS” for PS3.

Glen works extensively as a voice over artist and has recorded audio books for the BBC.