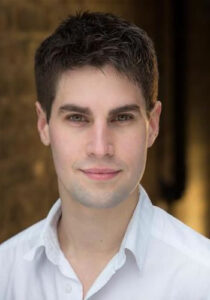 David began his Acting training at East 15 Acting School in East London. After a number of short films and theatre roles, David made his feature-film début in British Zombie Movie The Dead Inside. Following on from this, David was cast as ‘Tom’ in BAFTA winner Martin Gooch’s film Death – It’s a Mystery playing opposite Paul Freeman (Raiders of the Lost Ark, Hot Fuzz), Nick Moran (Lock Stock & Two Smoking Barrels) and Leslie Phillips (of “Carry On” fame). Theatre Credits include the title role in A Picture of Dorian Gray, Benedick in Shakespeare’s Much Ado About Nothing and Captain Phoebus in The Hunchback of Notre Dame. David also has 5 years of experience working as a Rifleman in the British Army (Infantry, 7 Rifles, TA).

David reads The Birdman of Farringdon Road by Jonathan Pinnock