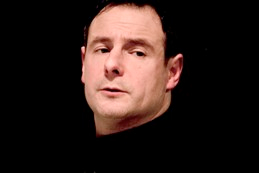 Theatre credits include: Iago in Othello, Autolycus in The Winter’s Tale, Tranio in Taming of the Shrew, Puck in A Midsummer Night’s Dream, Pompey in Measure for Measure, Diomedes in Troilus & Cressida and Lollio in The Changeling (all for Shakespeare at the Tobacco Factory), Richard in The Country (The Alma), Macbeth in Macbeth and Orsino in Twelfth Night (US tours), Horst in Bent, Scullery in Road (London), Hardy in Edge of Darkness (No 1 Tour), and Antigonus/Shepherd in Erica Whyman’s highly acclaimed version of The Winter’s Tale (Southwark Playhouse).

Chris reads Waiting for a Train by Roger Stennett