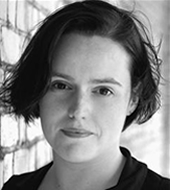 Becky currently plays Nic Hanson in ‘The Archers’ and is the voice of Becky Cranford in the BBC7 radio series ‘Children of Witchwood’.

Other recent work includes: Young Victoria in BBC 2’s ‘Timewatch’, ‘The Red Ribbon’ (Peopletalkradio), Series Seven: Horror & Series Four: Crime & Spies (Bunbury Banter), ‘A Twist in the Tale’ for the BBC Audio Music Festival, The Position (joinedupwriters) at The Old Red Lion, Kate in ‘Taming of the Shrew’ (Original Theatre – National tour), ‘Big Maggie’ (INDA),’The Witches’ (ATG) at Wyndhams Theatre, ‘Children of Witchwood’ for BBC Radio Drama. Lena in ‘Honolulu’ (Nominated for the Amnesty International Theatre Award), Kitty in ‘Charlatan’, Sally in ‘The Powder Jars’ and ‘Shark’ in ‘The Aquatic Ape’ all for the 5065 Lift at The Pleasance. Her first audiobook ‘Genesis’ by Bernard Beckett has just been released.